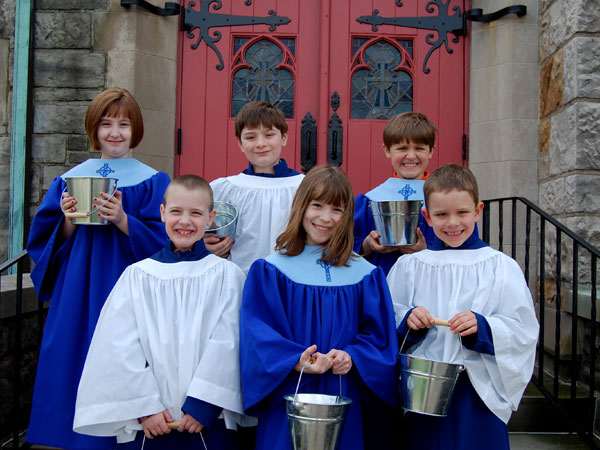 The History of the Pocket Change Project

When the project first began in 2010, the goal was simple: collect enough pocket change during the season of Lent to sponsor one child in Haiti for a year. There were about 30 Cherubs and we had seven weeks. If each of them was able to collect $8 we could combine our smaller contributions into one large contribution and succeed. But we only wanted pocket change. Why? Because people don't usually think very much about the small coins in their pockets and purses. Added up, however, we believed that all those small coins could amount to something significant. So, the overall vision for the project was that a handful of small coins – collected by a handful of small children – could affect the life of just one child in Haiti in a big way. Long story short, they exceeded their goal that year and sponsored more than one child.

In 2011 they asked the Children's Choir at Southminster Presbyterian Church to join them. With the help of both their church families, who were invited to join the fun and toss their own pocket change in the collection plates one Sunday morning, they were able to sponsor four children. In 2012, the Sunday school students at Westminster decided to take up a collection of their very own to contribute to the project. So did a local business, and five children were sponsored through the Pocket Change Project.

Ever since, the three children’s choirs have enthusiastically remained devoted to the project and dedicated to the mission. At the beginning of Lent in 2019, the collective number of children they had been able to sponsor totaled 93. And since that was the 10th anniversary of the project, their goal was to sponsor seven more for a grand total of 100. As history would have it, they once again exceeded that goal and were able to sponsor 17 for a grand total of 110!

Big change starts small! Please join us by collecting your own pocket change and adding it to ours each year.

Donate to The Pocket Change Project

"If you're anything like me, you swipe your ATM card for just about everything these days. Heck, I even swipe it for a $1.07 sweet tea at McDonalds! So when worthwhile initiatives like the Pocket Change Project arise, I don't have much pocket change lying around to contribute. In fact, I don't even have a little pocket change lying around. What I do have, however, is a little plastic card that I'd be happy to use if I could. Online donation opportunities are now available for people like me and my fellow plastic-card junkies. So swipe away, and thank you in advance — on behalf of the Cherubs — for taking the time to contribute, because every little bit helps."

Or, you may mail your check payable to Westminster Presbyterian Church to: