The History of Westminster Presbyterian Church 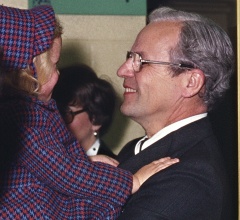 Dr. John H. Galbreath, our founding pastor, was a Marine Corps chaplain in World War II who served, among other places, at the battle of Iwo Jima. In the summer of 1946 he began knocking on doors in the growing suburb of Upper St. Clair, and held Westminster's first worship service on September 22 with 118 people present.

Ground was broken in August 1948, and what is now the southern wing of the building was dedicated on October 2, 1949. From the beginning Westminster has been active in the community, sponsoring or hosting all sorts of service groups and helping to found local organizations such as South Hills Interfaith Ministries. Over time our mission outreach has extended throughout the South Hills and the City of Pittsburgh, and to several other countries, including Haiti, Malawi, and India.

The church grew rapidly in the 1950s, and the current sanctuary was dedicated on November 1, 1959. A new wing north of the sanctuary was completed in 1991, and the last phase of expansion witnessed the opening of the WROC (Westminster Recreation & Outreach Center) in 1995.

The story of our church is not primarily about the building or the pastors, however, but about what the Holy Spirit has been doing in and through the congregation. Today Westminster has about 1800 members and continues to serve the local community, the greater Pittsburgh area, and many ministries abroad, believing that all people are precious in the eyes of God.

The Galbreath Bible Study Series was created using sermon notes from John Galbreath, founding pastor of Westminster Presbyterian Church. The series allows for study of how faith applies in different times and yet how timeless many faith and life issues remain, and it provides an opportunity for non-traditional Bible study. This means that each entry is appropriate for individual study but can also be used by small groups.